You are here: HOME » NEWS » COMPANY NEWS » What are the effects of the material of the infusion set on clinical medication？

In the process of intravenous infusion of drugs, the disposable infusion set is a necessary infusion device, and its clinical application is extremely wide. At present, infusion sets used in clinical hospitals in our country are generally made of polyvinyl chloride (PVC) resin. In order to make PVC transparent and soft, it is necessary to add about 40% of phthalic acid (diethyl) hexyl vinegar (DEHP) plasticizer. Studies have found that the infusion set made of PVC material has adsorption effect on many drugs. Certain drugs can also release DEHP. The released DEHP enters the human body together with the liquid and is harmful to the human body. DEHP has been proven to be a potential carcinogen. 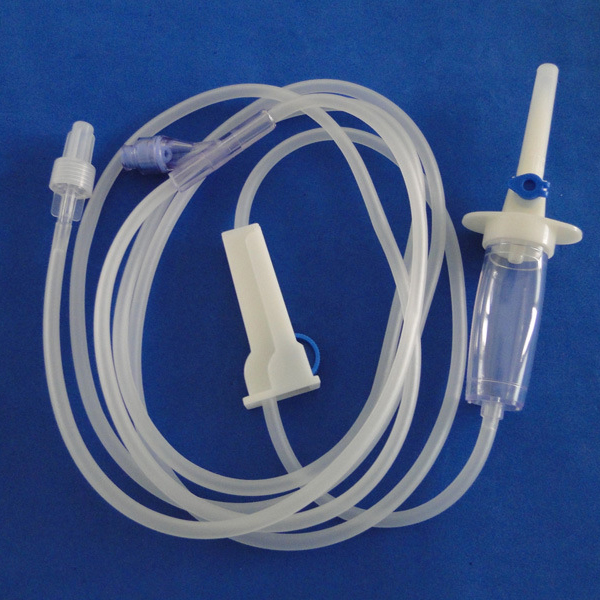 Our department began to study the interaction between drugs and plastic infusion tubes in the 1980s. We found that PVC infusion sets have a strong adsorption effect on some drugs (such as nitroglycerin and diazepam, etc.), which makes the prescription dose of the medicine not available to doctors. All are infused into the patient's body, thereby reducing the efficacy. During this period, there were also many related reports at home and abroad. The Chinese Pharmacy reported in the 14th issue of 2003 that the use of PVC soft bags for infusion can reduce amiodarone to 60% after 12 hours, reduce throat by 26% after 8 hours, and reduce carmustine by 25% after 5.52 hours. After 15 minutes, fentanyl is reduced by 25%, cyclosporin is reduced by 40-50% after 24 hours, tacrolimus is reduced by 15% after 6 hours, urokinase is reduced by 15-20% after 2-30 minutes, and Vit A is reduced by 23 %.

In clinical applications, it has been found that certain drugs can promote the migration and release of DEHP. For example, the surfactant polyoxyethylene castor oil contained in paclitaxel injection can accelerate the release of DEHP and form white flocs. For this reason, the instructions indicate that the medicine should be diluted in 500 ml of 0.9% sodium chloride injection or 5% glucose injection before use, and the infusion bag and infusion tube made of non-PVC material should be used for intravenous drip. In addition to paclitaxel injection, the drugs that use polyoxyethylene castor oil as a surfactant include cyclosporine (immunosuppressive agent) and tenipopol (anti-tumor drug), and PVC infusion bags and infusion tubes cannot be used. Infusion.

At present, the problems and defects of using DEHP plasticized PVC materials have become a consensus. my country has banned DEHP plasticized PVC films in the food packaging industry. infusion sets made of non-PVC materials have been produced and used in developed countries and regions such as Europe, the United States, and Japan. In the past, non-PVC infusion sets relied on imports. Fortunately, my country's Shandong Weigao Group Medical Polymer Products Co., Ltd. has taken the lead in the domestic research and development of disposable non-PVC infusion sets made of polyolefin materials in recent years, and has been approved by the State Food and Drug Administration. Approval of listing. This product is of great significance to improve the overall level of clinical infusion in my country.

With the improvement of the living standards of the people in our country and the enhancement of self-health awareness, the demand for safe, effective and environmentally friendly disposable medical infusion devices will become more and more urgent. It is recommended that the relevant departments of our country support the non-PVC category of the disposable medical device industry. Product development and promotion and application, especially the development and promotion of infusion sets and blood transfusion devices made of non-PVC materials, and the introduction of regulations similar to the restrictions on PVC packaging films in the food packaging industry to ensure the safety of intravenous infusion and blood transfusion for the majority of patients.