The working principle of the hemodialysis catheter is that after the catheter is inserted into the central venous system, it connects the hemodialysis pipeline and the dialysis machine. The blood containing metabolic wastes of the dialysis patient is sucked from the artery end of the catheter, passes through the circulation pipeline and the dialysis machine, and passes through diffusion and convection. And physical mechanisms such as adsorption, remove excess water and toxins in the body, adjust the patient’s electrolyte and acid-base balance, and the purified blood is pumped back into the central vein of the human body at the venous end of the catheter. 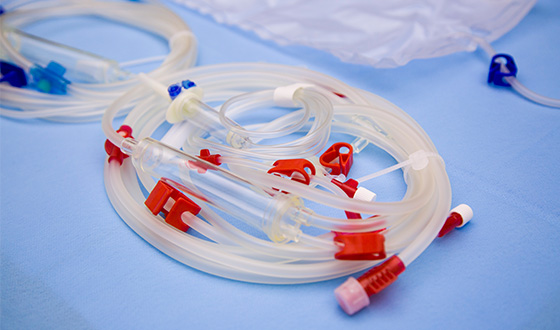 hemodialysis catheter The catheter used for hemodialysis is a tunnel catheter because it is placed under the skin. There are two types of tunnel conduits: with or without sleeve. Sleeveless tunnel catheters are used in emergency situations and short-term (up to 3 weeks). NKF recommends that the tunnel cuff catheter for temporary use can be used for more than 3 weeks under the following conditions:

1. The AV fistula or graft has been placed, but it is not ready for use.

2. There are no other permanent access options. For example, when the patient's blood vessels are not strong enough for a fistula or transplant.

3. There are two openings inside the catheter. One is a red (arterial) opening that is used to draw blood from a vein and drain it out of the body into the dialysis route, and the other is a blue (venous) opening that allows cleaned blood to flow back into your body.

The material of the catheter has good compatibility, and the surface of the tube body is treated with ultra-slip treatment, which reduces the resistance of the catheter, effectively protects the inner wall of the blood vessel, and prevents platelet adhesion and thrombosis. The color buckle is equipped with a white card with a specified flow rate to avoid errors during operation.

The disposable sterile hemodialysis catheter produced by Zibo Dongmai Medical is mainly used for hemodialysis in emergency situations. The catheter package can be directly inserted into the central venous system through large veins such as internal jugular vein and subclavian vein to ensure sufficient blood flow for effective dialysis. In the case of chronic renal failure/uremia, a permanent vascular access can be established by surgery, the most commonly used is forearm arteriovenous fistula. Before each dialysis, puncture the arteriovenous fistula to establish blood access. Compared with the consumables required for arteriovenous fistula puncture and dialysis, the technical requirements and difficulty of the disposable sterile hemodialysis catheter kit produced by Zibo Dongmai Medical are much higher, and the safety and effectiveness of the product have also been confirmed by clinical studies.

In the case of chronic renal failure/uremia or long-term dialysis, more and more patients choose peritoneal dialysis for convenience or economic reasons. However, peritoneal dialysis cannot completely replace hemodialysis. In some emergency situations, such as life-threatening For patients with hyperkalemia, pulmonary edema, and drug poisoning, hemodialysis catheters should be given priority.